skip to main | skip to sidebar

About three months ago, Nathan's mom dropped Nathan and my older son and I off at an indoor play place. It was nice to see the "boys"...can't believe one is now 21 yrs old, having a lot fun together. I love that Matt will get right in there and play with Nathan. I managed to get a couple of pictures of them together before the batteries in my camera died. After playing, Nathan's mom picked us up and she and the four of us went out for dinner. Nathan is a picky eater. For years he has loved a certain kind of soup, that they get at an ethnic restaurant. So, that's where we went for dinner. Matt and I tried food I have never tried before. It was a nice experience.

Dec 19, Matt and I went to visit Nathan and his family for our Christmas visit. Holy, crazy busy household given Nathan's sisters are now 2 and a half and he's almost 6. Remember I have an empty nest now with Matt off at college. For a short time, it just seemed like too much going on for me!

I gave Nathan two playdoh sets. The first one he opened, "Oh no, not again!" I asked him what was wrong? Apparently he already had that set. So much for having checked with his mom what to get him given I never know what he already has. She has forgotten this was the first set she got him. Oh well, he loved the second set and said, "oh wow, just want I wanted for Christmas. I love it! Thank you!" His sisters gifts were a hit with all three children. Nathan decided he wanted their gift too! He had to be reminded to share with his sisters nicely as these were the girl's gifts.

I received a number of gifts but two that will forever be very special to me. Nathan made me a Christmas card that he wrote and it includes two pics of all three kids with Santa and is signed, "Love Nathan" This is the first card he has made me, hasn't even signed cards in the past, so really very special. Secondly, videos from the year from his parents. I haven't had the time to watch them yet but am really looking forward to doing so. I particularly want to see the video of him playing hockey. It's his first year playing and his mom says he's really improved since the video was taken. But to even get a glimpse of this, will be special...I have a feeling it will make me cry.

We managed to get a pic of the 7 of us. We only have one other of all seven of us. Most often there is no one else around during our visits to take a pic that includes us all. So, I had to ask if we could get this pic before their nanny went home.
Posted by Shell at 2:33 a.m. 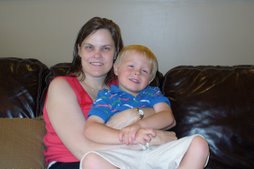